Lightroom is an integral part of my workflow when processing, developing, and editing photos. I consider myself a minimalist with editing photos as I am a tad bit old school because I still enjoy film and processing photos in the darkroom. However, I have almost completely switched over to digital for all of my professional work.  When I travel, shoot an event, take family portraits, etc, I usually have hundreds of photos to sort through. Lightroom is wonderful for this and for organizing, selecting favorites and then doing basic edits. When working on anything more complex, I will begin in Lightroom and then continue to edit in Photoshop. For years, my colleagues have been advertising and selling presets for both programs that help them move through their workflow faster. Presets are nice as you can just click on the chosen preset and Lightroom automatically adjusts the photograph. I find that their presets are usually too harsh for the type of photographs that I produce. I’ve created my own simple ones that I use, but I am always looking for some that could work for my type of photography. Every photograph is different, so there will never be a perfect preset for every single photograph you take, but combined with some precise editing, presets do have a place in the digital editing workflow.

When SleekLens reached out to me to look into their Strike a Pose Portrait Presets (also known as SaP), I was intrigued. They claim that their presets are “instant photo boosters.” Could these presets provide the outlet that I’ve been looking for with simple, modern edits? Let’s find out.

Installing the “Strike a Pose” presets and brushes (there are over 69 different brush options!) was quite simple. Within a few minutes, I was up and running. With so many different preset and brush options, I wanted to try them all out and see what worked. I chose a couple of portrait images that never made my final cut as I was not thrilled with the edits and wanted to investigate whether these presets would help. For each photo, I will show the before raw file and the after edited file using one of the SleekLens presets. I tried almost all of the presets on these photos, and for examples I’ve chosen a few to show how they can affect each photo.  Some work and some don’t, but each preset can always be a base for more editing as well so you can easily tone some of them down or make them stronger when developing. (which I recommend to make the presets work for you)

Portrait 1: Before & After, SaP All In One Catch Me If You Can 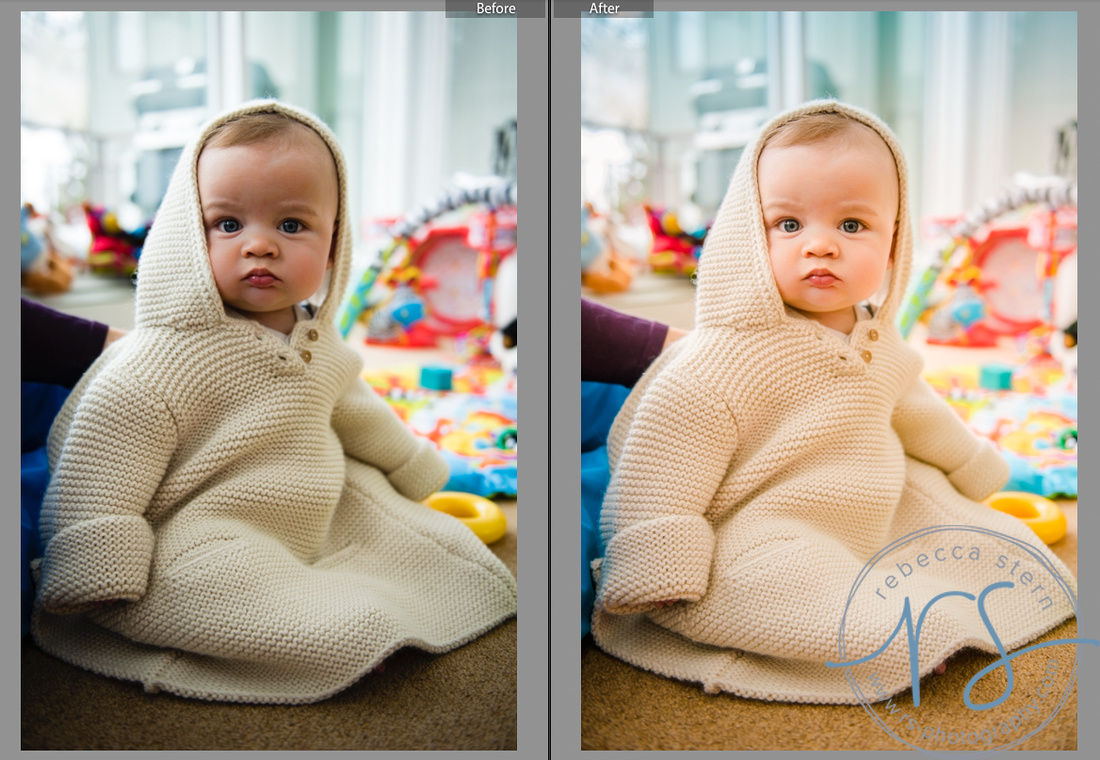 This all in one preset really enhanced the little guy and brought some needed brightness to this raw file. I do not like that it also brightened the background, but that is easily fixable using a vignette preset or just doing it yourself in the vignetting section in Lightroom. These presets are very easy to use and they can be stacked on top of each other as well.

This is the final version with the vignette stacked on the preset as well as a bronze preset just to bring back a little warmth: 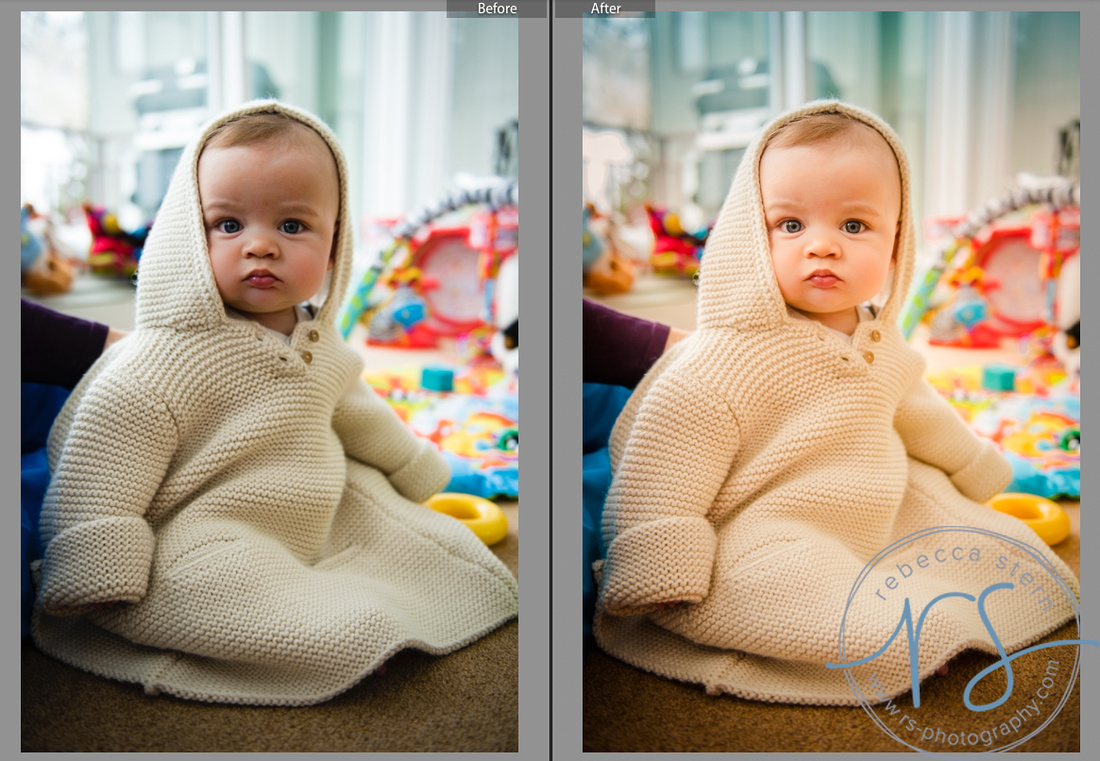 For the second example, I wanted to test out their system of presets for the SaP. It’s very easy to follow as a 1-6 step preset process for a photograph. Step 1 is called Base, Step 2 Exposure, Step 3 Color Correct, Step 4 Tone/Tint, Step 5 Polish, Step 6 Vignette. These are the basics to editing any digital photograph, so it’s nice that they provide a simple step-by-step approach to use their presets. The previous example was using one of their All-In-One’s so it incorporated all of these steps into one full preset. Handy when time is of the essence.

This is the before and after of this photograph just on its own, using no presets and how I had edited it quickly before: 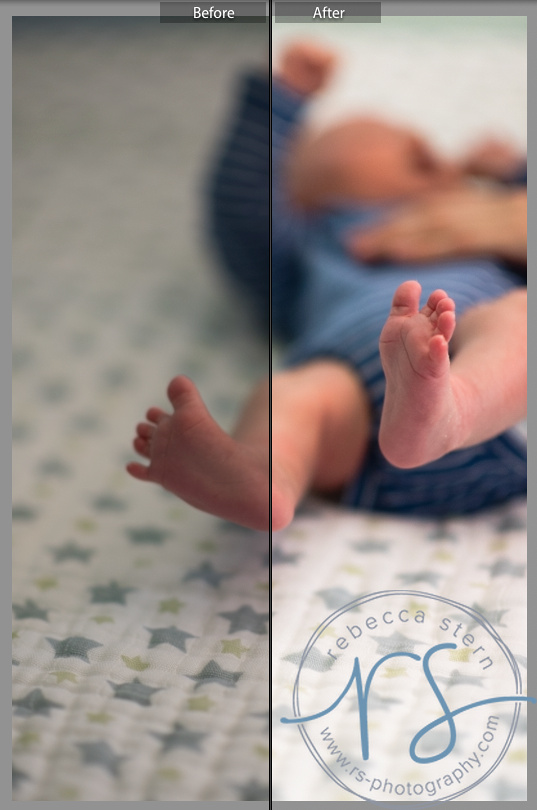 Step 1: SaP Base, I chose to use the Auto Tone (Color) preset as I know this image needed some white balance correction. 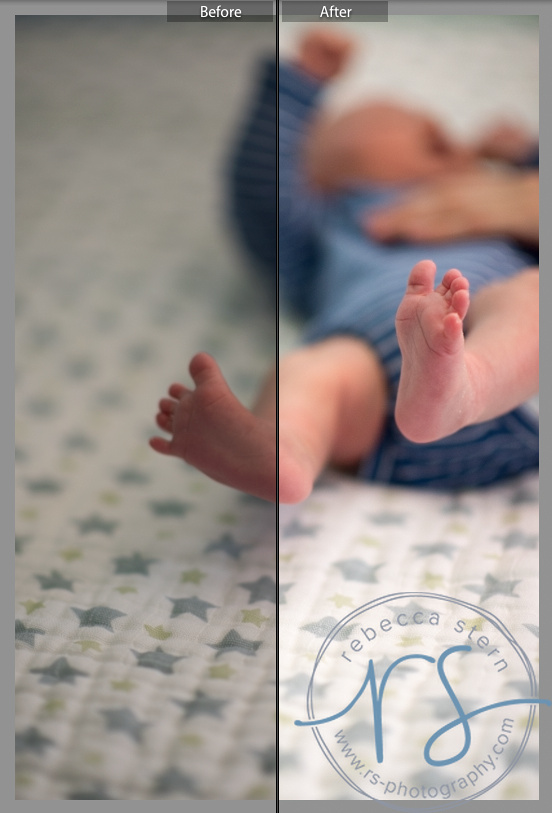 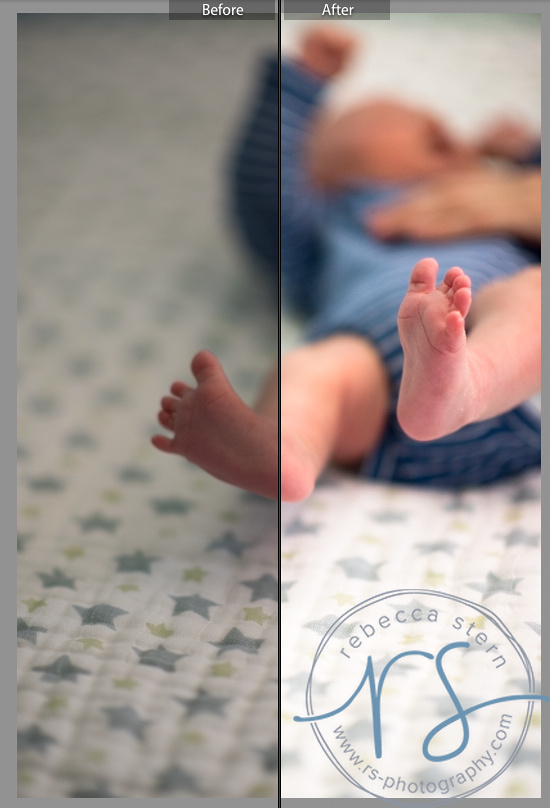 Step 3: SaP Color Correct, fix red skin. Babies are notorious for having super red skin. I usually adjust this manually in the luminance editing section, but this preset does pretty well to accomplish a similar effect. 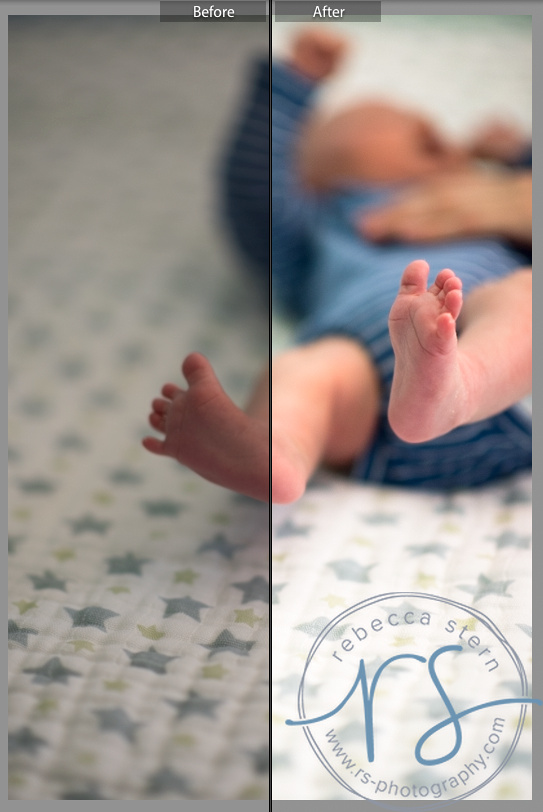 Step 4: SaP Tone/Text, Summer Ten. There are many nice presets in this section, but for this photograph, the summer ten wins out. It’s a nice balance of warmth without overpowering. 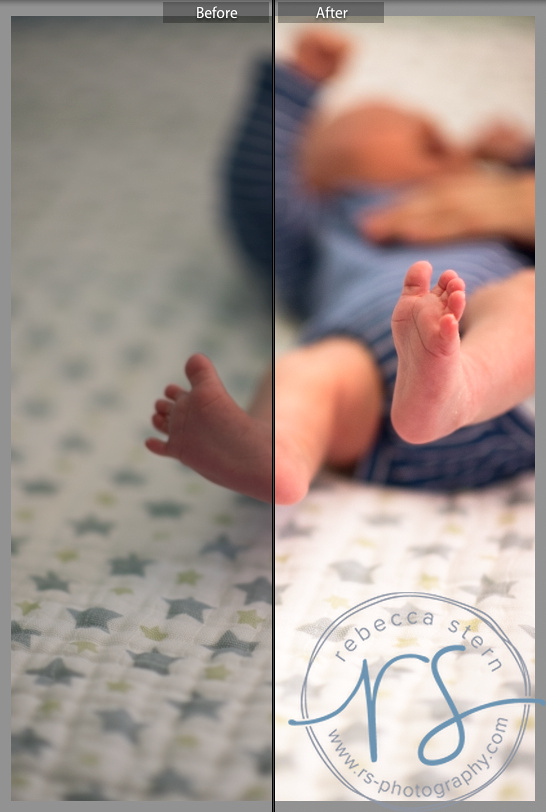 Step 5: SaP Polish, Soften. Normally, I do not soften images, but for this demo, it seemed appropriate to test it out. It makes this image dreamier. What do you think? There are only 5 options in the Polish section. If I weren’t doing this example, I probably would not use any of the Polish presets for this photograph as none of them specifically work well for this photograph. For some of my other photographs, I could see the high and low contrast and the sharpen presets working well. 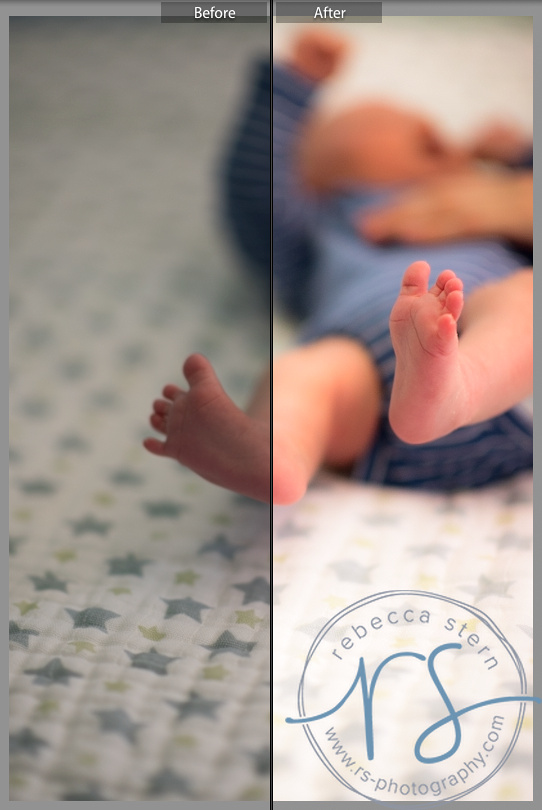 Step 6: SaP Vignette, Black Dreamy. Always end with a little vignette; the rule of thumb when in the darkroom and the same applies for the digital darkroom.

Here’s the final image with all 6 presets stacked! What do you think, did it work? 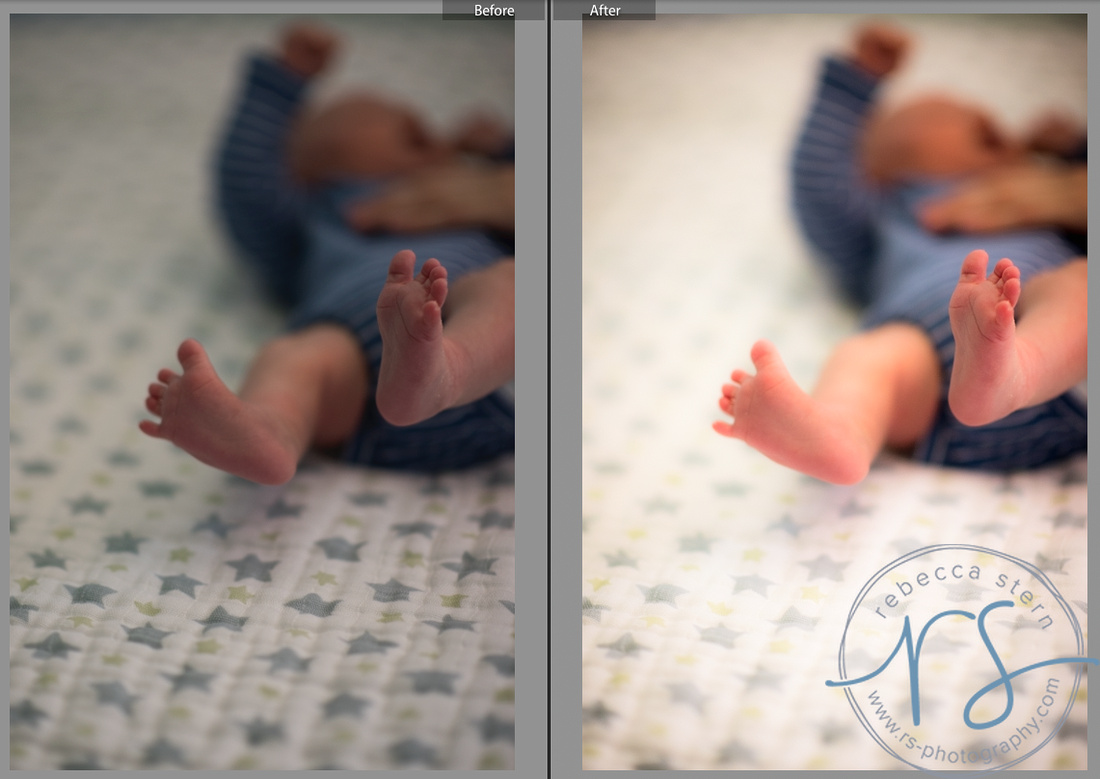 Overall, I am impressed with these presets. I certainly had my doubts and there are some presets that go overboard and are not my style, but there are also presets that work for my photographs and that is different from most of the other presets out there. Adjusting individual presets to my style and either reducing or enhancing them is simple and easy. They are a great base to any photograph.

Presets work for some photographs and not for others. Though I may not use presets for every photograph I edit, it’s always nice to experiment and play while editing to see what works. That’s the artistic process and I highly encourage trying, testing, playing, and messing up. If you’re not failing, you’re not learning. Try out these presets and see if they will work for you.